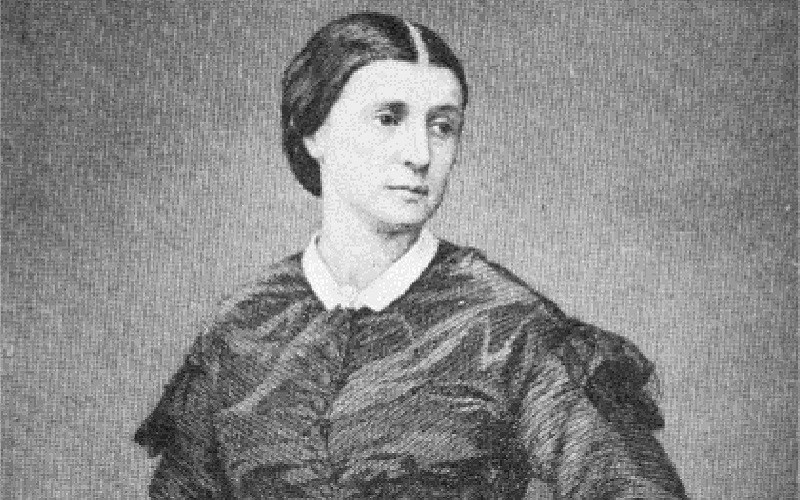 On October 1st, 1864, Rose O’Neal Greenhow drowned near the Cape Fear River while trying to break the Union blockade of North Carolina’s coast. What was this well known political socialite, the friend of presidents, senators, and generals, doing on a Confederate blockade breaker?

The daughter of a slave-holding plantation owner, Greenhow was born on her family’s plantation in Maryland in either 1813 or 1817 — the exact date is disputed. Greenhow’s father was murdered by his valet shortly after her birth. With four children to feed and a plantation to manage, Rose and her sister Ellen were sent by their mother to live with their wealthy aunt in Washington D.C.

Greenhow’s aunt, Maria Ann Hill, was the proprietor of a very popular boarding house in D.C. Many notable and well-known figures in D.C. society frequented the boarding house, affording Greenhow the opportunity to meet some of the most powerful and influential people in America.

Sometime in the 1830s, Greenhow met the prominent Virginia doctor and lawyer Robert Greenhow Jr. Their courtship was widely celebrated amongst D.C. socialites, even earning the approval of first lady Dolly Madison. The couple wed in 1835 with much social fanfare.

By the 1850s, the Greenhows were a well-established power couple within Washington social circles. Dr. Greenhow went own to work with the state department, leading the family to move to Mexico City and San Francisco. Rose eventually moved back to Washington with her children while her husband stayed in California. In 1854, Dr. Greenhow was killed in an accident in San Francisco. Rose’s status as a widow, however, had little impact on her social status in D.C.

After her husband’s death, Greenhow began to reveal her Confederate sympathies amongst likeminded friends. She openly supported the effort to “preserve the Southern way of life,” including the institution of American chattel slavery. Her comments eventually reached the ears of US Army captain Thomas Jordan, a Confederate sympathizer who had secretly organized a spy network within D.C. Jordan recruited Greenhow hoping to leverage her social connections for the Southern cause. Jordan provided Greenhow with a cipher ring in order for her to send secret messages to the Confederates.

Jordan eventually left the US army and headed south to join the Confederate Army. Greenhow became the new head of the D.C. espionage network. Her popularity in social circles within the heart of Union territory made her one of the most valuable assets in the Confederate spy network.

In the summer of 1861, Greenhow supplied General Beauregard with crucial information on Union military movements that helped secure the Confederate victory at the First Battle of Bull Run.

As the seriousness of the Union defeat at Bull Run began to set in, pro-Union politicians and friends began to take notice of the company that Greenhow kept. Allen Pinkerton, the head of the newly formed Secret Service, was ordered to quietly investigate Greenhow. Upon discovering pro-Confederate figures frequenting Greenhow’s residence, Pinkerton had Greenhow arrested for suspicion of espionage on August 23, 1861.

A search of Greenhow’s home revealed secret communiques, maps, and letters, all revealing her role as a spy for the Confederates. The documents even showed that Greenhow had become a close friend of South Carolina senator John C. Calhoun before his death. Calhoun’s views on nullification and slavery most likely shaped Greenhow’s Confederate sympathies. Many of the seized documents are now held by the National Archives.

Surprisingly, Greenhow was not initially sent to prison for her crimes. Pinkerton placed her under house arrest and even allowed Greenhow to continue sending messages to the South. The local press, however, caught wind of the arrangement and lambasted Pinkerton for his leniency. Faced with mounting criticism, Pinkerton sent Greenhow to the Old Capitol Prison. While many of her co-conspirators faced espionage hearings, Greenhow was never interrogated and never faced a trial. During her imprisonment, Greenhow continued to pass along information to the Confederates. Some say that Greenhow would send secret messages to couriers as they passed by her cell window where she would light numerous candles as a code.

The aristocrats and elites of Europe were largely sympathetic to the Southern cause. The economic ties between the Southern US and Europe were strong which, in turn, helped Greenhow gain an audience with the likes of Queen Victoria of England and Napolean III of France. While in England, Greenhow became engaged to Lord Granville Leveson-Gower, Second Earl of Granville and a descendant of Sir Richard Grenville, cousin to Sir Walter Raleigh and one of the leaders of the infamous Lost Colony at Roanoke.

Though many European’s sympathized with the Confederacy, they were reluctant to openly support the war effort. On August 19, 1864, Greenhow left Europe to deliver official dispatches to Confederate leaders. A month and a half later, as her ship approached a Union blockade, it ran aground at the mouth of the Cape Fear River off the North Carolina coast. Fearing capture, Greenhow insisted on abandoning ship in a small dinghy. Unbeknownst to her, the stuck ship was well within the range of Confederate guns which would have kept her safe from Union capture.

As the dinghy approached the shore, a wave capsized the boat. Weighed down with over $2,000 worth of gold secretly sewen into her clothing, Greenhow drowned. When her body was recovered from the water near Wilmington, the dispatches, a notebook, a copy of her memoirs, and a letter to her daughter were discovered.

Greenhow was buried with full military honors in Wilmington, North Carolina. In 1888, the Ladies Memorial Association erected a marker on Greenhow’s grave that reads “Mrs. Rose O’Neal Greenhow. A Bearer of Dispatches to the Confederate Government. ” The marker and Greenhow’s grave can be seen at Oakdale Cemetary in Wilmington, North Carolina. You can find out more from their website.