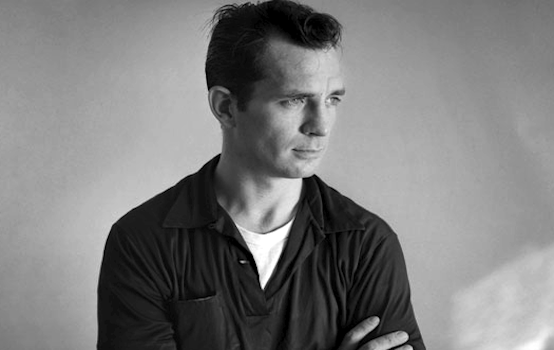 “I transferred to my local bus and instructed the driver to let me off at the country road that wound three miles through the piney woods to my mother’s house in Big Easonburg Woods which is a country crossroads outside Rocky Mount.” — Jack Kerouac, The Dharma Bums

Known for his literary experimentation, disdain for modern materialism, and love of traveling, Jack Kerouac was the voice of the Beat Generation. It would surprise many North Carolina natives to learn that Kerouac spent quite a bit of time in Rocky Mount, North Carolina.

Kerouac made frequent trips to Rocky Mount throughout the late 40s to mid-50s. In June 1948, Kerouac came to Rocky Mount to visit his sister upon the birth of his nephew. Kerouac rejoined his family that winter for Christmas — in a small white house at the end of Tarboro Street, on the Edgecombe side of the county line.

The streets were still dirt back then. Kerouac even referred to the comings and goings of vintage cars along the muddy roadway in his classic work “On the Road.” Rocky Mount served as the inspiration for the fictional Testament, VA in the now-famous book.

Kerouac’s sister, whom he called Nin, moved away from the little white house at the end of Tarboro Street and to what locals now know as the West Mount area, outside Rocky Mount proper.

In the summer of 1952, Kerouac returned to Rocky Mount from a stint in Mexico City with William S. Burroughs. It was during this time in North Carolina that Kerouac wrote “The Dharma Bums.” Almost 6 chapters of the book describe Kerouac’s stay in Big Easonburg Woods in West Mount, including his frequent trips to the country store down the street at the West Mount intersection, which is now a pizza place:

“When I’d go to the country store to buy bread and milk the old boys there sitting around among bamboo poles and molasses barrels’d say, ‘What you do in those woods?” — Kerouac, The Dharma Bums

Known for his extensive travel across the US, Kerouac would return to the little cabin rented by his sister and her husband in West Mount whenever he would tire of being on the road.

Taking buses, hitchhiking, or riding the rails, Jack would always get dropped off at the intersection of Little Easonburg at Halifax Road, walking the rest of the way to Nin’s house. Kerouac chronicled the solitary walk, describing the snow-covered tobacco fields and barns dotted along the roadway.

Each time, Kerouac would return to the little house in West Mount to take his place on the back porch where he slept and wrote. Jack would spend his nights writing on that porch, often falling asleep mid-story. As he began to write “Visions of Gerard,” he took over the home’s little kitchen as his studio.

Kerouac had climbed mountains in California, wrote a novel on the tiled bathroom floor of William S. Burroughs’ home in Mexico City, and worked as a railroad brakeman across the continental US, all while soaking in the sights that average people took for granted.

But when Kerouac needed rest and meditation, he came to Rocky Mount. For Kerouac, moonlit walks through the middle of Eastern North Carolina tobacco fields were therapeutic. The pinewoods surrounding his sister’s home comforted him. The nearby creek he named “Buddha Creek” whispered peace and tranquility to him.

For Kerouac for a time, coming to Rocky Mount meant coming home. And that home influenced many aspects of his works, read by millions over the years. Though much has changed in the area over the last 70 years, many of Jack’s beloved pinewoods and tobacco fields are still there.

One can still take the solitary walk from Little Easonburg and down Halifax Road to the old house where the great author once lived, though few realize the significance of the house as they pass it by. Thankfully, the tale of Kerouac’s inspiration in a little town in Eastern North Carolina isn’t forgotten. Here’s hoping it will inspire another Kerouac for our generation.