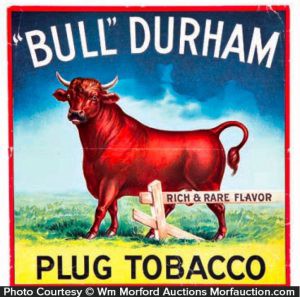 By the middle of the 19th century, North Carolina was producing well over 30 million pounds of commercial tobacco thanks to the unique soil of Central and Eastern North Carolina and the development of the bright leaf curing process.

Much of the work on tobacco farms in the US was carried out on the backs of slaves. As chattel slavery grew in the South, so did tobacco production. The advent of the Civil War, however, did little to slow tobacco farming in North Carolina as many of its producers did not rely as heavily on slave labor as those in other agricultural endeavors.

The Piedmont area, for example, was somewhat sympathetic to the Union cause due to the fact that their operations relied less on slave labor as compared to other areas in North Carolina and the South as a whole. This is why North Carolina tobacco was relatively unimpacted by the Civil War. If anything, the outbreak of the war eventually helped catapult North Carolina tobacco to the forefront of American agricultural development.

During the Civil War, North Carolina was host to many battles and skirmishes between the Union and the Confederacy. During Sherman’s notorious march through the South in 1864 and 1865, soldiers from both sides in North Carolina occupied their time while awaiting the terms of Confederate surrender by raiding local shops and farms. At Bennet Place in Durham, soldiers looted the tobacco factory of John R. Green, hauling off crates of what would eventually be known as Green’s world-famous Bull Durham Smoking Tobacco. The soldiers soon found that the bright leaf tobacco of North Carolina was the mildest smoking tobacco in the country.

After the war, soldiers began to send letters to the tobacco farmers in North Carolina begging for shipments of bright leaf tobacco. This word-of-mouth marketing morphed Green’s small and locally known Bull Durham brand into a global household name. Green quickly partnered with William T. Blackwell, creating the W.T. Blackwell and Company Tobacco firm. This partnership led to Bull Durham Tobacco becoming the first nationally marketed tobacco brand. It was at this point that the North Carolina tobacco trade began to emerge as a national industry. With Green’s success, though, came competition.

Enter Washington Duke — a farmer and former Confederate soldier from Durham. Upon returning to his homestead after the war, Duke discovered a few stores of tobacco that the marauding troops hadn’t touched. Seeing a financial opportunity, Duke began to shred and package his own smoking tobacco. By 1874, aided by his sons, Duke had established his own full-time smoking tobacco manufacturing company operating under the brand name Pro Bono Publico Smoking Tobacco. Around that same time, Richard Joshua Reynolds relocated from Virginia to the small North Carolina town of Winston to start his own tobacco company.

At this point, cigarettes were still hand-rolled which kept production numbers low and prices high. That changed when James “Buck” Duke, Washington’s son, discovered that a viable cigarette rolling machine had been invented by James A. Bonsack from Virginia. The machine was capable of producing 120,000 cigarettes per day. It would take over 40 hand rollers working 10 hours a day to match that output. Duke purchased the machine and established his own cigarette making factory. The rolling machine gave W. Duke, Sons and Company a substantial advantage over their competitors. They were able to outproduce all other tobacco companies and offer their cigarettes at a lower price.

Thanks to such innovative business practices and foresight, North Carolina became America’s premier tobacco source and was recognized as such on a global scale. Even European smokers could discern the difference between the tobacco that came from Virginia and the mildly smooth bright leaf of North Carolina. The stage was set for the emergence of Big Tobacco in the Tar Heel State.