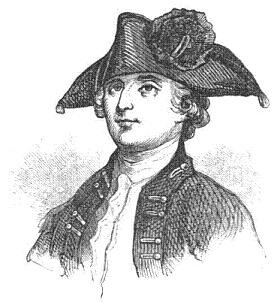 In the mid to late 1700s, before revolution broke out amongst the colonies, North Carolina dealt with its own unique rebellion. In the 1760s, citizens of the inland “back-country” counties of North Carolina began to protest against corruption and excessive taxation perpetrated by local officials. These citizens referred to themselves as Regulators, due to their desire to regulate their own affairs apart from government interference.

In 1764, the Regulators residing in what was still Orange, Granville, and Anson counties began to publicly air their grievances. The people started to harass appointed officials such as sheriffs, registrars, clerks, and judges. For the Regulators, the issue hinged on excessive fees and taxes levied by these officials. In some instances, local sheriffs and tax collectors intentionally lost tax records so as to be able to overtax the local civilians.

Royal governor Arthur Dobbs attempted to pacify the Regulators by issuing a proclamation that denounced the taking of excessive taxes and fees, but the local officials mostly ignored it. With the arrival of the new royal governor William Tryon and his building of a palace in the then state capital of New Bern with public money, the situation grew even more contentious. Tryon was a skilled military leader as well as politician and was fully prepared to put down the regulator squabble by force if necessary.

In 1770, the Regulators went from rhetoric to action when a mob physically seized and assaulted Edmund Fanning, a corrupt politician who held numerous offices in Orange County. A year later in Hillsborough, a special session of court was called in order for the Regulators to prove the injustices perpetrated at the hands of the corrupt officials. The circuit judges feared to travel to the session, necessitating governor Tryon to send the national guard to protect them. The officials refused the summons to appear or to give an account for their questionable actions. This spurred the Regulators to take up arms and form their own militia. Tryon had no patience for such rebellion and, with the consent of the North Carolina Assembly, the governor called up the militia and prepared to confront the Regulators head-on.

The militia converged on the Regulators as they camped just west of Hillsborough. On May 16, 1771, the Regulators made one final attempt to speak with Tryon. The governor would only acquiesce if the Regulators agreed to lay down their arms and disperse. The Regulators were incensed and after their failure to respond to Tryon’s terms, he sent a messenger to warn the Regulators to disarm and disband or he would fire upon them. The Regulators reportedly responded with “ fire and be damned!” And so with that, the Battle of Alamance, the last battle of the Regulator Movement, began. The militia, being better trained and disciplined, outgunned and outfought the Regulators. The rebellion was successfully put down.

In the aftermath, 7 Regulator instigators were hanged, with the remainder pardoned by King George III upon the recommendation of Governor Tryon. In the end, while the Regulator Movement may appear to have been a failure for those who opposed government corruption, the fires of the American Revolution were already lit before the movement ended. For many, the Regulator Movement revealed the growing resentment among the colonists toward the English government. It is quite possible that the outcome of the movement spurred North Carolina Patriots to take early action in rebelling against the British crown, with the state being one of the first to call for colonial independence.