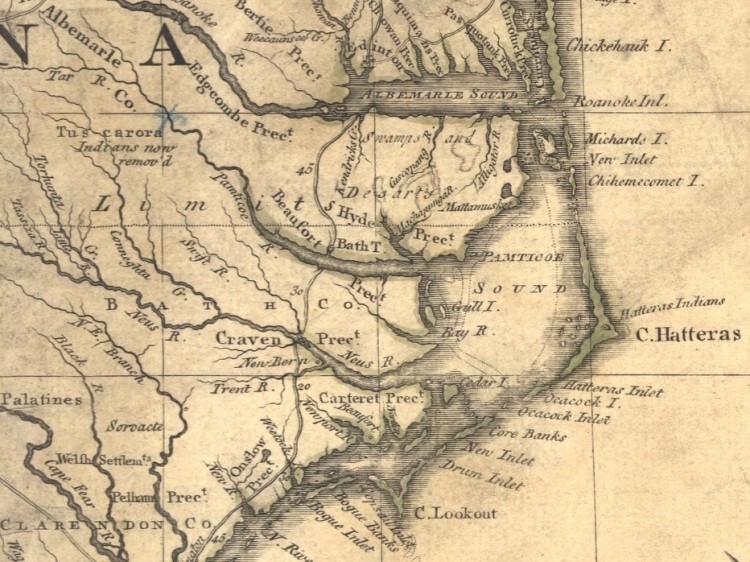 From September 22, 1711 to February 11, 1715, the British, Dutch, and German colonists of North Carolina fought against the Tuscarora Indians, an Iroquoian tribe settled around the Piedmont and north-central portion of the Coastal Plain. The colonists had maintained a shaky peace with the Tuscarora since early colonization. The Europeans, however, were known to mistreat and take advantage of the Tuscarora in issues of trade and settlement.

In 1711, the Swiss colonists in New Bern expelled the local Tuscarora and confiscated their land. The Tuscarora responded by razing local settlements along the Trent, Roanoke, and Neuse rivers, including the town of Bath. For three days straight the Tuscarora killed 200 colonists, including 80 children. The Tuscarora captured Baron Von Graffrenreid, the founder of New Bern, and released him on the condition that he would not retaliate against them. A colonist by the name of William Brice, however, sought revenge against the Tuscarora and killed one of their local chiefs. The region was then plunged into war. The colonists would have suffered greater casualties if it had not been for chief Tom Blount, who ruled over the Tuscarora in the north-central Coastal Plain along the Tar and Roanoke rivers. Blount maintained a neutral stance during the Tuscarora War, refusing to join King Hancock’s campaign against the colonists. After the war, Blount was recognized by the colony for his efforts and granted kingship over the entirety of the Tuscarora Nation.

During the initial onset of the war, the North Carolina militia was unable to stand against the Tuscarora and sought help from Virginia. Governor Spotswood, however, would only help if North Carolina agreed to cede land to Virginia. Refusing Virginia’s terms, North Carolina then asked South Carolina for assistance. The South Carolina militia and members of the Yamasee tribe marched into North Carolina, cutting down nearly 800 Tuscarora. The warring Tuscarora faction chief, King Hancock, agreed to a peace treaty and hostilities ceased for a time until the English violated the treaty. War once again broke out. The colonists and about 1000 Algonquian allies marched into Tuscarora territory, finally putting an end to the war.

The Tuscarora War was interesting in that it united the North Carolina colonists across political and religious lines. Even the pacifist Quakers helped to provide provisions to the militia and Indian allies. In the aftermath, approximately 400 Tuscarora Indians were sold into slavery with the remaining members who did not swear allegiance to Blount fleeing to the North to join their Iroquois cousins as the Sixth Nation in the Iroquoian Five Nations Confederacy.