Home » The Secession of the State of Franklin 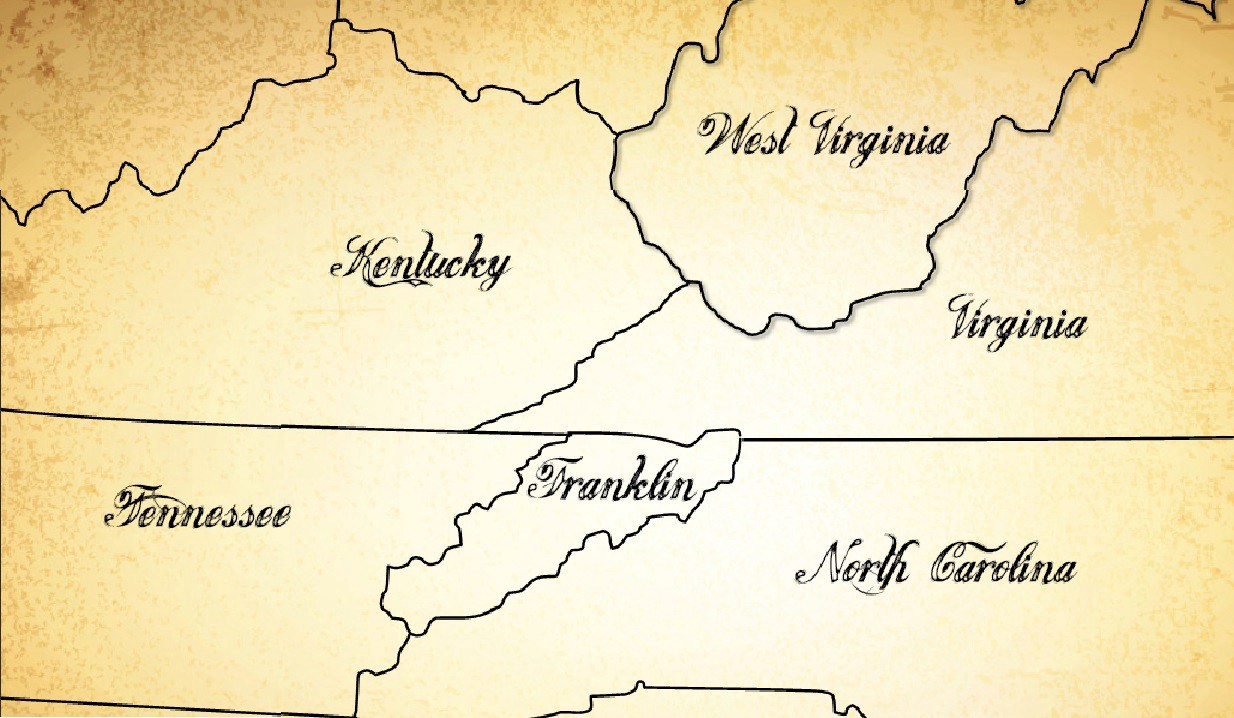 The Secession of the State of Franklin

On August 23, 1784, in what was then the North Carolina counties of Washington, Sullivan, Spencer, and Greene, a group of frontiersmen declared themselves free from the state of North Carolina, establishing their own independent state that would eventually be known as the State of Franklin.

After the conclusion of the Revolutionary War, the United States government faced mounting war debts. In an attempt to offset its own debt, the North Carolina government passed legislation to cede the Western Counties portion of the state to the federal government in April of 1784. The region included nearly 30 million acres between the Appalachian Mountains and the Mississippi River, in what is now northeastern Tennessee. The area, commonly referred to as the Washington District, primarily consisted of frontiersmen and Cherokee natives.

One of the stipulations of the cession deal was that the federal government would be fully responsible for the region within two years. Congress was reluctant to accept the deal and refused to act on the proposal. Just a few months later, a newly elected North Carolina General Assembly rescinded the cession proposal as they feared that getting rid of the land would not alleviate their financial problems. In an attempt to keep the area secure, the North Carolina government called for the formation of a defense brigade, with the task to assemble the brigade appointed to John Sevier.

Sevier was a noted soldier and frontiersman with extensive experience in Appalachia. Upon arriving in the Washington District of North Carolina, Sevier soon learned that its population had become disgruntled with the North Carolina government. The frontier families in the area felt betrayed by North Carolina during its attempt to hand over the land to the federal government. After learning that the state had changed its mind and sought to exercise more control over the trans-Appalachian frontier, the residents were incensed.

Many frontiersmen had settled in Western North Carolina for the express purpose of ridding themselves of the everyday annoyance of state government. Taxation was a central issue, as the residents of the Appalachian frontier believed that they were not adequately represented in the General Assembly. The Appalachianites simply wanted to be left alone to govern their own affairs.

The situation in Western North Carolina quickly deteriorated as residents began to call for their own independent state. On August 23, 1784, the counties within the Washington District seated delegates at Jonesborough and voted to declare themselves the 14th independent state in America. Sevier was elected governor of the new state, though it appears he accepted the position reluctantly. In December of that year, the delegation was reconvened and a state constitution for what was named Frankland was drafted. Oddly enough, a referendum soundly defeated the new constitution. The breakaway government was forced to operate under portions of the North Carolina constitution.

In May of 1785, the Frankland delegation submitted a petition for statehood to the US Congress. While seven of the 13 states voted to accept Frankland as the 14th state in the union, it was less than the two-thirds majority required by the Articles of Confederation to admit new states. In an attempt to bolster their efforts and gain support for their cause, the delegation voted to change the name of their state to Franklin to honor the Founding Father Benjamin Franklin. Sevier himself even attempted to persuade the statesman to support their cause but to no avail.

Running out of options, the delegates of Franklin decided to declare themselves a free and sovereign republic, operating without the recognition of either the federal government or North Carolina, though neither seemed interested in forcing Franklin to rejoin the union. Franklin operated as its own republic for nearly two years. Convening its own courts, establishing a capital in Greeneville, and finally adopting their own constitution, it appeared that the frontiersmen had successfully achieved self-governance.

Franklin, however, wouldn’t last. Toward the end of 1786, North Carolina politicians gained a renewed interest in the area. In an attempt to regain the territory, the North Carolina government offered to wave all back-taxes for residents of Franklin if the self-declared republic would rejoin the state. Many key residents of Franklin accepted the offer and began to withdraw support for Franklin. The offer, however, was formally rejected by the Franklin government in 1787. North Carolina dispatched troops to the area and reestablished a formal presence in the territory alongside Franklin’s own government.

As 1787 dragged on, the government of Franklin began attempts to expand westward, forcibly and illegally seizing lands from Native peoples. This fostered hostilities from the local Cherokee and Chickasaw who began to prepare for war against the Franklinites. In September of 1787, the Franklin delegation gathered for what would become their last formal meeting. Support for continuing the failed political experiment had significantly waned. In an attempt to finally bring an end to the Franklin dispute, North Carolina ordered the Washington County sheriff to seize all of Sevier’s property for taxes owed. Tensions flared, with forces from both sides gathering outside the home of Col. John Tipton, the leader of the North Carolina troops stationed in Franklin. A skirmish broke out with casualties on both sides. Sevier’s forces eventually retreated to Jonesborough.

After the Battle of Franklin, the Cherokee and Chickasaw saw an opportunity to attack Franklin. The allied Native forces engaged in regular skirmishes against the frontiersmen, further destabilizing the area. Out of desperation, Sevier sought help from the Spanish. The Spanish, however, wanted full control of Franklin as a Spanish territory. North Carolina, fearing a European nation gaining a foothold in U.S. territory, finally arrested Sevier in August of 1788. Sevier’s supporters, however, freed him from jail and escaped to Lesser Franklin, what is now Sevier County, Tennesse.

Desperate and out of options, Sevier and his followers finally surrendered to North Carolina in February of 1789. After swearing oaths of allegiance to the state of North Carolina, the Franklinites were once again accepted as residents of North Carolina. The state government sent troops to quash the Cherokee and Chickasaw forces, finally putting an end to the Franklin saga.

Though Lesser Franklin would go on as a small independent territory until 1791, the area formerly known as Franklin would once again be given to the federal government by North Carolina. This time, however, Congress accepted the land and established the Southwest Territory — the precursor to the State of Tennesse. Interestingly enough, Sevier would go on to represent the territory in Congress in 1790 and was elected the first governor of the newly formed State of Tennesse in 1796.