Home » What’s in a Name? The Origins of Odd North Carolina Placenames 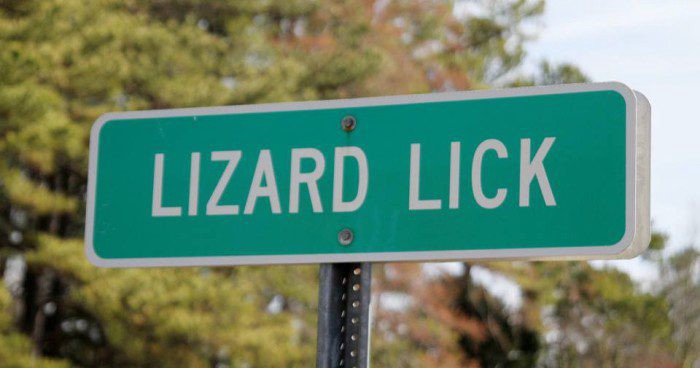 What’s in a Name? The Origins of Odd North Carolina Placenames

North Carolina is home to many tongue-twisting and unique placenames. From Lizard Lick to Chocowinity, and to the grammatically vexing Conetoe (which somehow, despite the rules of the English language, isn’t pronounced Cone Toe), the Old North State is chock-full of odd-sounding cities and towns. Let’s take a look at a few of the interesting placenames in the Tar Heel State.

Conetoe
Let’s go ahead and get this one out of the way. It’s one of my personal pet peeves. Locals will tell you that the correct pronunciation is along the lines of kuh-neat-uh. If that’s the case, then I suppose Pine Tops is actually Piney Tups. Anyway, the story goes that the modern town, which popped up in the 19th century, was named for the Conetoe Creek, itself an Indian placename.

Chocowinity
No, it isn’t some chocolaty treat. It’s a town in Beaufort County. While residents claim that the name of the town is the Indian word for “fish from many waters,” it’s more likely that it’s from the Tuscarora word chackauene, which means “otters.”

Whynot
The story behind this placename is actually pretty straightforward. Apparently, when residents couldn’t decide on the name for their Randolph County town and after numerous proposals of “why not this, or why not that,” someone shouted “let’s just name it Why Not and go home!”

Kill Devil Hills
The mystery behind this placename goes back long before it became famous for the Wright brothers’ historic flight. While no one is entirely sure of the origin of the name Kill Devil Hills, one theory holds that it has something to do with alcohol (doesn’t everything?). Back in the old days of rum-running, rum from the West Indies was sometimes called “kill-devil.” Supposedly a shipwreck near the area resulted in bottles of the devil’s drink washing ashore. The residents apparently tried to hide the rum in the nearby sand dunes.

Lizard Lick
While this odd little township in Wake County may now be famous for the towing and repo show of the same name, the origin story is pretty funny. Apparently a door-to-door salesman was taken aback by the abundance of lizards sunning and licking themselves on a local fence. The name stuck.

Bat Cave
No, this isn’t Bruce Wayne’s vacation home when he wants to get away from fighting crime in Gotham City. The unincorporated town nestled away in Henderson County is named for a nearby cave that’s home to an abundance of bats. That hasn’t, however, stopped the local merchants from cashing in on the DC Comics superhero connection.

Duck
It’s literally named after its many ducks. That’s it. Seriously.

Barbecue Township
According to local lore, the town’s earliest residents claimed that the early morning mist wafting from a nearby creek resembled smoke from a BBQ pit. This is North Carolina, after all. No word on whether the progenitors of the town preferred Eastern or Lexington style ‘cue.

Meat Camp
No, this isn’t a summer camp for Ron Swanson wannabes. According to town history, hunters established a camp back in the olden days where they field dressed and salted the meat from their kills.