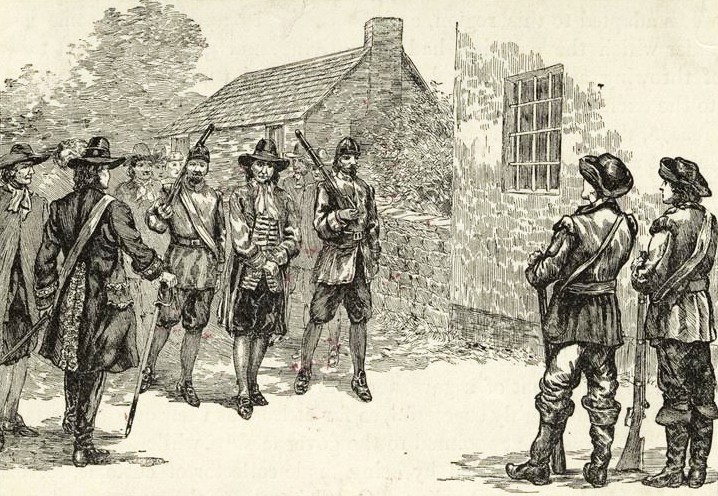 A little known uprising, Culpeper’s Rebellion, was sparked in Eastern North Carolina near what is now Elizabeth City over the issue of taxation — a full century before the American Revolution. This rebellion was ultimately successful, especially in helping establish a better functioning government in the North Carolina portion of the Carolina Province.

During the early years of colonization, the English colonies were prohibited from manufacturing and exporting their own goods. The colonies produced and exported raw materials, which were then shipped, manufactured into goods, and then shipped back to the colonies and other European nations. For example, the colonies could not export furniture but could export wood. They could produce the materials to build ships, but could not produce actual ships.

The colonies could produce cotton and tobacco, but not the equipment to process them. The raw materials were exported to England which would, in turn, manufacture goods and ship them to other European nations or back to the colonies. All raw material produced by the colonies was to be sent to England first. The colonies were even prohibited from shipping raw materials between each other. England was the ultimate broker and made sure to collect taxes at every point of the process.

This entire system was codified within the Navigational Acts which ensured a hefty profit for the Crown at the expense of the colonies. The colonists of Carolina were exempted from paying this tax when the colony was first chartered in order to encourage colonization in the region. That exemption, however, only lasted for 7 years. In 1670, the exemption expired and the Navigation Acts went into full force in Carolina.

During the development of the Carolina Provinces, the Lords Proprietors (the holders of the Carolina charter) failed to establish a stable and properly functioning government that served the two regions — Albemarle (what would later become North Carolina) and Clarendon (modern South Carolina). This was especially true along the inner coast of Eastern North Carolina. Various governors were appointed to the Carolina Provinces in order to enforce the will of the English crown. These governors proved ineffective, however, as they took advantage of the sparsely populated rural areas and sought to make themselves wealthy.

In 1672, 2 years after the enforcement of the Navigation Acts, the colonists of the Albemarle region sent governor Peter Carteret to England to ask the Lords Proprietors to reestablish the tax exemption that existed prior to the enforcement of the Navigation Acts. The lords refused, mainly due to their fear that the Crown would revoke their charter for the Carolina Province. Carteret was then replaced by John Jenkins as governor for the Albemarle region. While he appointed a tax collector to begin enforcing the Navigation Acts, he never pushed the issue and seems to not have intended to enforce the tax.

Thomas Miller and Thomas Eastchurch, two vocal supporters of the Lords Proprietors, began to challenge Jenkins’ refusal to enforce the new taxes. For his part, Miller was charged with treason against the colony and was thrown into prison. Miller was able to escape and eventually traveled to England with Eastchurch to inform the lords of the situation in the Carolina colony.

Upon hearing of the calamity that had befallen Carolina, the lords appointed Eastchurch as the new governor and Miller as tax collector. Miller returned to the colony fully prepared to exercise his authority as tax collector, while Eastchurch was delayed in England. Miller was ruthless in enforcing the Navigation Acts taxes as well as proactively seeking out and confiscating illegal imports from the colonists. With Eastchurch still delayed, Miller had himself declared interim governor and always traveled with his own private guards when out among the people.

In 1677, a group of 40 men who were upset with the lack of leadership from the Lords Proprietors took up arms and overthrew the North Carolina government. The men were led by George Durant, a long-time resident of the Albemarle region, Valentine Bird, and John Culpeper, a known rabble-rouser who had been banished from Charles Town in the South Carolina portion of the province. The group took up arms against Miller and imprisoned him. Miller, amazingly, escaped prison a second time and fled to England to seek the help of the lords. Culpeper, however, quickly followed to make a case for the colonists.

The lords called for an investigation and eventually charged Culpeper with treason. Lord Shaftesbury, one of the holders of the Carolina charter, surprisingly defended Culpeper and the uprising, laying blame at the feet of his fellow Lords Proprietors and declaring that the colonists were justified in their rebellion. Culpeper was freed and returned to the colony as a hero. Durant would eventually take control of the colony while the new governor’s arrival was delayed after he was kidnapped by Turkish pirates. Under his leadership, Durant successfully restored peace while also pardoning the rebels. Durant successfully began collecting the tax of the Navigation Acts, which the colonists paid now that an ordered and functioning government that did not abuse its citizens had been established.